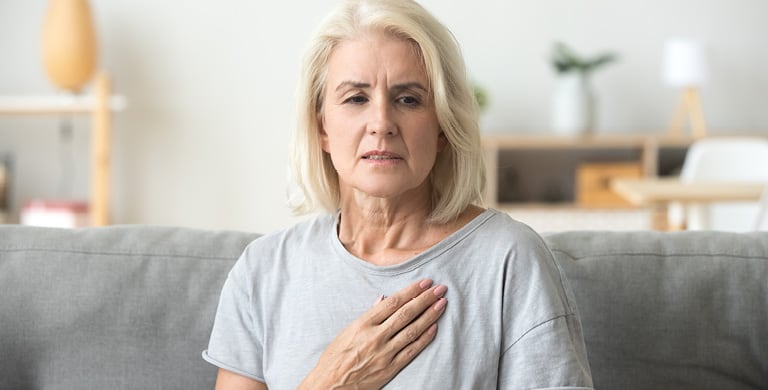 All about cardiac arrhythmia | 6 min read

What is an arrhythmia?

An arrhythmia is a problem with the rate or rhythm of the heartbeat. During an arrhythmia, the heart can beat too fast, too slow, or with an irregular rhythm.

Most arrhythmias are harmless, but some can be serious or even life threatening. During an arrhythmia, the heart may not be able to pump enough blood to the body. Lack of blood flow can damage the brain, heart, and other organs.

Each electrical signal begins in a group of cells called the sinus node or sino-atrial (SA) node. The SA node is located in the heart’s upper right chamber, the right atrium. In a healthy adult heart at rest, the SA node fires off an electrical signal to begin a new heartbeat 60 to 100 times a minute.

The electrical signal then moves down to a group of cells called the atrio-ventricular (AV) node, located between the atria and the ventricles. Here, the signal slows down just a little, allowing the ventricles time to finish filling with blood.

The electrical signal then leaves the AV node and travels along a pathway called the bundle of His. This pathway divides into a right bundle branch and a left bundle branch. The signal goes down these branches to the ventricles, causing them to contract and pump blood to the lungs and the rest of the body.

The ventricles then relax, and the heartbeat process starts all over again in the SA node.

A problem with any part of this process can cause an arrhythmia. For example, in atrial fibrillation, a common type of arrhythmia, electrical signals travel through the atria in a fast and disorganized way. This causes the atria to quiver instead of contract.

There are many types of arrhythmia. Most arrhythmias are harmless, but some are not. The outlook for a person who has an arrhythmia depends on the type and severity of the arrhythmia.

Even serious arrhythmias often can be successfully treated. Most people who have arrhythmias are able to live normal, healthy lives.

What causes an arrhythmia?

An arrhythmia also can occur if another part of the heart starts to produce electrical signals. This adds to the signals from the special nerve cells and disrupts the normal heartbeat.

Smoking, heavy alcohol use, use of some drugs (such as cocaine or amphetamines), use of some prescription or over-the-counter medicines, or too much caffeine or nicotine can lead to arrhythmias in some people.

A heart attack or other condition that damages the heart’s electrical system also can cause arrhythmias. Examples of such conditions include high blood pressure, coronary heart disease, heart failure, an overactive or underactive thyroid gland (too much or too little thyroid hormone produced), and rheumatic heart disease.

How are arrhythmias treated?

Common modern arrhythmia treatments include medicines and cardiac electrophysiology studies with ablation therapy. Your doctor may recommend treatment if your arrhythmia causes serious symptoms, such as dizziness, chest pain, or fainting.

Your doctor also may recommend treatment if the arrhythmia increases your risk for problems such as heart failure, stroke, or sudden cardiac arrest.

Medicines can slow down a heart that’s beating too fast. They also can change an abnormal heart rhythm to a normal, steady rhythm. Medicines that do this are called antiarrhythmics.

Some of the medicines used to slow a fast heart rate are beta blockers, calcium channel blockers, and digoxin (digitalis). These medicines often are used to treat atrial fibrillation (AF).

Some of the medicines used to restore a normal heart rhythm are amiodarone, sotalol and flecainide. These medicines often have side effects. Some side effects can make an arrhythmia worse or even cause a different kind of arrhythmia.

Medicines also can control an underlying medical condition that might be causing an arrhythmia, such as heart disease or a thyroid condition.

Some arrhythmias are treated with pacemakers. A pacemaker is a small device that’s placed under the skin of your chest or abdomen to help control abnormal heart rhythms.

Pacemakers have sensors that detect the heart’s electrical activity. When the device senses an abnormal heart rhythm, it sends electrical pulses to prompt the heart to beat at a normal rate.

Some arrhythmias are treated with a jolt of electricity to the heart. This type of treatment is called cardioversion or defibrillation, depending on which type of arrhythmia is being treated.

Some people who are at risk for ventricular fibrillation (VF) are treated with a device called an implantable cardioverter defibrillator (ICD). Like a pacemaker, an ICD is a small device that’s placed under the skin in the chest. This device uses electrical pulses or shocks to help control life-threatening arrhythmias.

An ICD continuously monitors the heartbeat. If it senses a dangerous ventricular arrhythmia, it sends an electric shock to the heart to restore a normal heartbeat.

Cardiac electrophysiology study (EPS) is a test to look at the heart’s electrical function. It allows doctors to check for abnormal heartbeats or heart rhythms.

The procedure is done in a hospital laboratory by trained staff including a cardiologist, technicians, and nurses.

The laboratory nurse will clean your groin area and apply a numbing medicine (aesthetic). The cardiologist will then place several short tubes (called sheaths) into the groin area. Once these sheaths are in place, wires or catheters electrodes can be passed through the sheaths into your body.

A procedure called catheter ablation is used to treat some arrhythmias if medicines don’t work. During this procedure, a thin, flexible tube is put into a blood vessel in your groin. The tube is then guided to your heart.

A special machine sends energy through the tube to your heart. The energy finds and destroys small areas of heart tissue where abnormal heart rhythms may start. Catheter ablation usually is done in a hospital as part of an electrophysiology study.