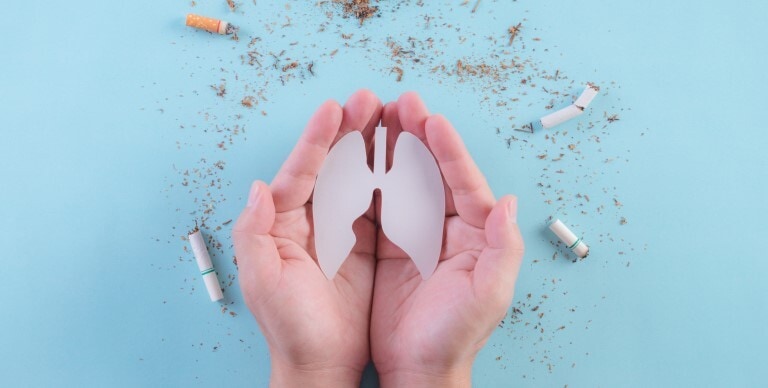 Smoking is a leading cause of lung cancer globally. Apart from lung cancer, cigarette smoking can cause cancer almost anywhere in the body, including the mouth, throat, esophagus, stomach, colon, liver, and pancreas. However, lung cancer can also occur in people who have never smoked, including previous radiation therapy patients, those with genetic polymorphisms, and those with a family history of lung cancer.

Small cell lung cancer occurs almost exclusively in heavy smokers and is less common in non-smokers. It usually starts in the breathing tubes (bronchi) and proliferates, creating large tumours and spreading (metastasizing) throughout the body.

Adenocarcinoma occurs predominantly in people who currently smoke or formerly smoked, but it’s also the most common type of lung cancer for non-smokers. It is usually found in the outer parts of the lung and is more likely to be detected before it has spread. It is more common in women than in men and is more likely to occur in younger people.

Large cell lung carcinoma is called that way because of the large size of the cancer cells when viewed with a microscope. This type of cancer often develops in the outer regions of the lungs and tends to grow and spread more aggressively than other forms of lung cancer.

What are the possible symptoms of lung cancer?

A cough that doesn’t go away
Coughing up blood, even a tiny bit
Shortness of breath
Chest pain
Hoarseness
Losing weight without trying
Bone pain
Headache

Apart from refraining from smoking, lung cancer prevention includes controlling occupational exposures, indoor and outdoor air pollution, and understanding the carcinogenic and preventive effects of dietary and other lifestyle factors.