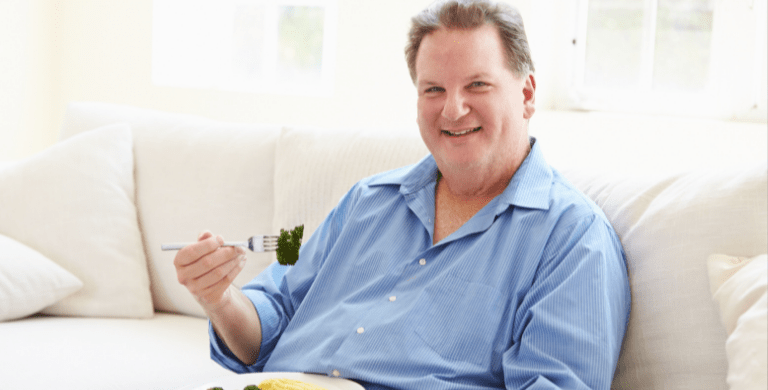 We all know that with being overweight and being obese, comes a myriad of health issues. Obesity increases the risk of a heart attack, stroke, hypertension, gallstones, cancer, osteoarthritis, obstructive sleep apnoea, fatty liver, and depression, to name but a few.

While obesity and the negative health consequences affect both men and women, being obese has been shown to take a particular toll on men, affecting, amongst other things, their hormones, sexuality, and prostate health. Some research suggests that obesity is nearly three times more deadly for men than it is for women.

In a study of nearly 4 million men and women globally, the risk of dying before 70 was 19% for men and 11% for women of average weight. These risks jumped to 30% and 15%, respectively, for obese men and women. Research suggests that this could be because obese men have more excellent insulin resistance, higher liver fat levels and are at a greater risk of developing diabetes than obese women.

Obesity is defined as having a Body Mass Index (BMI) greater than or equal to 30. Currently, obesity is estimated to affect 11% of men and 15% of women globally, which translates to 600 million obese adults worldwide. Using BMI measurements on men can be tricky and out of sync due to the general body density of men. It is better to use measurements for abdomens and necks. Men with waistlines more than 94 cm and necks thicker than 45 cm are in danger and have a worse health prognosis.

Dr Gary Hudson, a Johannesburg-based physician with a particular interest in obesity and metabolic disorders, estimates that up to 70% of men in South Africa are overweight, and alarmingly 20% are obese. Obesity in men also seems to affect the white population the most, and he sites weight training and bulking from a young age for contact sports as one of the reasons for this, along with high levels of steroid use and abuse as playing a role in the development of obesity in later years. His research has found that while men tend to be active until 20, exercise seems to start tapering off after that. By 40 years of age, only 30% remain active, and very few do cardiovascular training, with most rather concentrating on weight training. He adds that men’s portions are too big. Men also tend to have higher fat and protein meals than females and consume more alcohol and soft drinks than women.

Interestingly, males who are obese have low hormones while females have high hormones. In men, obesity lowers testosterone levels. Additionally, in terms of male sexuality, men who are obese have an increased risk of erectile dysfunction (ED). Obesity may also impair fertility. Global research has also linked extra body fat with an increased risk of developing prostate cancer and disturbed sleep like snoring and obstructive sleep apnoea. He says that in men, fat is very visceral, with very little being subcutaneous fat.

There is good news. Studies have found that weight loss improves symptoms of ED. Other studies have shown that by losing just 10% of his body weight, a man can decrease his risk of dying before 70 by 20%.

Several scientific studies show that many obesity-related conditions improve with as little as a 5-10% weight loss, including improvements in cholesterol, hypertension, diabetes, obstructive sleep apnoea, and inflammation.

Speak to your doctor about weight loss management options that might be best for you. Go to www.ilivelite.co.za for more information.