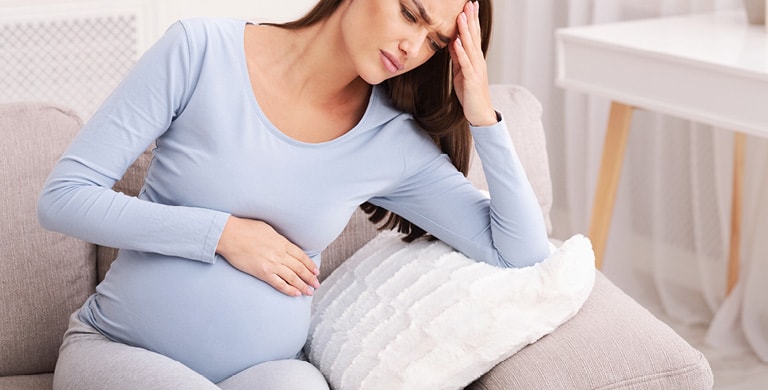 More than baby blues: Depression during and after pregnancy | 9 min read

Pregnancy are thought to be a time of emotional wellbeing for women, but studies now show that during pregnancy women are not necessarily protected from mood disorders. Life changes around pregnancy can make women more vulnerable to mental illness, therefor women are at higher risk of developing depression or anxiety during pregnancy and the postpartum period.

Many people know about postnatal or postpartum depression, but how many know it can occur even before the baby is born? Postpartum depression is only one type of mood disorder in a wider spectrum of perinatal mood and anxiety disorders. The perinatal period refers to the time from conception to the end of the first year after the birth. Not everyone experiences the deep sadness and disconnection of postpartum depression.

What used to be called Postnatal Depression is now increasingly being renamed Perinatal Distress (PND) as the medical fraternity recognises it can occur both during and after pregnancy as typical depression and/or heightened anxiety. Although PND is highly treatable, and detectable it’s generally under-diagnosed in our society. This means many women struggle unnecessarily, with repercussions that can negatively affect marriages, families, careers and communities.

Depression can lead to unhealthy behavioural changes and depression during pregnancy is no exception. It has been associated with poor prenatal care and an increase in obstetric complications. Depressed women are less likely to take care of their own health than women without depression. This may have several negative consequences such as poor attendance to their obstetric appointments, poor nutrition and an increase in alcohol consumption and smoking. Several obstetric complications such as high blood pressure, premature labour and an increase in operative deliveries (e.g. vacuum-assist delivery, forceps delivery and caesarean section) are associated with depression. As a result, the newborn’s growth and development may be negatively affected as well.

Types of depression during and after pregnancy

Depression during and after pregnancy is typically divided into the following categories: (1) the baby blues (2) perinatal distress (encompassing prenatal and postpartum depression) and (3) postpartum psychosis.

Certain conditions such as maternity blues are so common (about 70% of women will experience baby blues) that it is deemed a ‘normal’ experience. Typically, the symptoms commence around the fourth day after birth. Signs and symptoms of depression after childbirth vary, depending on the type of depression:

These signs and symptoms last only for a few days to a week or two.

Psychological support is the only treatment for maternity or baby blues. The ‘baby blues’ needs to be monitored carefully as about 20% of women who experience the ‘baby blues’, will progress to having postpartum depression or perinatal distress, a major depressive disorder.

Essentially, the symptoms of antenatal (during pregnancy) and postpartum depression are the same as those seen in non-pregnant women and presents like a major depressive disorder.

The challenge with diagnosing PND is that many normal pregnancy symptoms and ‘new mother’ difficulties – such as changes in mood, appetite or sleep patterns, fatigue and guilt feelings– can mimic depressive symptoms. Similarly, many tired, expectant or new mums don’t have the time that they used to for personal grooming or hobbies. Prominent anxiety symptoms typically increase the distress of these women. However, when these symptoms become severe: interfering with a woman’s ability to cope with daily life and connecting with her child, leading to negative consequences for both the baby and the mother; action should be taken to help her immediately.

The exact cause of PND is unknown but it is suspected that genetic factors and hormonal changes pre and post-delivery could be the cause of PND. Perinatal distress frequently co-occurs with other psychiatric problems such as anxiety or substance abuse.

Who is at risk of developing PND?

Those who are more at risk of developing perinatal distress are women who have:

The signs and symptoms associated with postpartum depression may initially seem to be the baby blues, but they are more intense and last longer and can eventually hinder your ability to care for your baby and go about your everyday activities and responsibilities.
If postpartum depression is left untreated, these symptoms can continue for several months or longer.

Some signs to watch out for are:

There is a wealth of literature on the importance of a healthy bond between a mother and her baby, especially during the first months of the baby’s life. If this first relationship is secure, it provides a stable, healthy base for the baby to explore and face the world. Depression may alter this bonding experience, making the baby more vulnerable to emotional difficulties later in its life.

The impact of postnatal depression on the newborn is:

The impact of untreated postnatal depression in the mother is:

It is thus very important to treat depression during the perinatal period (during pregnancy and the first year after birth). The course of PND varies in severity and the symptoms may resolve spontaneously or require active management. The management requires the identification of symptoms and a team approach with monitoring of both baby and mother. Simple measures such as improved self-care (bathing, sleeping and eating) and improved social support may improve the pregnant woman’s or new mother’s mental health. Psychological management in the form of supportive therapy, interpersonal therapy and cognitive behaviour therapy may be the sole form of treatment or can be used in conjunction with pharmacotherapy; depending on the severity of the depressive symptoms. Patients with moderate to severe depressive symptoms or patients who are high risk may require the use of an antidepressant. Certain serotonin re-uptake inhibitors are relatively safe in pregnancy and breastfeeding.

The impact of management of the baby and mother is a decreased risk with regard to harm, improved ability to function and improved bonding. If medication is required, the risk and benefits need to be weighed as certain medications can negatively impact the baby or foetus.

Postpartum psychosis is a rare condition that typically develops within the first two weeks after delivery. The signs and symptoms of this condition are severe and may include:

When to visit your doctor

Pregnant and new mothers who find themselves overwhelmed, frustrated, anxious, persistently teary, or depressed should not be silent or ashamed.
You should call your doctor if the symptoms as mentioned in this article are still present after two weeks or if they become more intense during your pregnancy. If you feel that it is difficult to care for yourself or your newborn and to attend to your daily responsibilities or if you have thoughts of harming yourself or your baby it is paramount that you visit your doctor.

Getting help is a gift to both you and your child.

New fathers can also have difficulty developing an emotional bond with their child compared with mothers, which may increase feelings of helplessness. Depression in fathers is believed to be just as treatable, but it often is not recognized.

Review your lifestyle when planning to fall pregnant. Regular exercise and good nutrition, including supplements such as folate, are beneficial to both physical and mental health. Alcohol and cigarette smoking should be avoided completely from the time the decision to conceive is made.

The key take-home message of this article is early identification and appropriate management of depressive symptoms.

Questions to ask your doctor