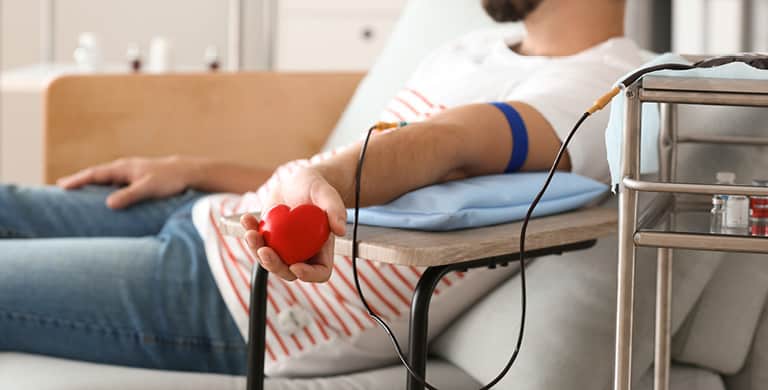 There are four main blood groups (types of blood) – A, B, AB and O. Your blood group is determined by the genes you inherit from your parents. Each group can be either RhD positive or RhD negative, which means that in total there are eight blood groups.

The four main blood groups are defined by the ABO system: • Blood group A – has A antigens on the red blood cells with anti-B antibodies in the plasma.

This means you can be one of eight blood groups:
Blood is made up of red blood cells, white blood cells and platelets in a liquid called plasma.  Your blood group is identified by antibodies and antigens in the blood. Antibodies are proteins found in plasma. They’re part of your body’s natural defences. They recognise foreign substances, such as germs, and alert your immune system, which destroys them.

Antigens are protein molecules found on the surface of red blood cells.

Type O-negative blood is called the universal donor type because it is compatible with any blood type. Type AB-positive blood is called the universal recipient type because a person who has it can receive the blood of any type. In most cases, O RhD negative blood (O-) can safely be given to anyone. It’s often used in medical emergencies when the blood type isn’t immediately known. It’s safe for most recipients because it doesn’t have any A, B or RhD antigens on the surface of the cells, and is compatible with every other ABO and RhD.

Type AB is the rarest with only 4% of South Africans having this blood type.  AB donors have both A and B antigens on the surface, but neither of the antibodies.

If you have a blood transfusion – where blood is taken from one person and given to another – your blood will be tested against a sample of donor cells that contain ABO and RhD antigens. If there’s no reaction, donor blood with the same ABO and RhD type can be used.

Pregnant women are always given a blood group test. This is because if the mother is RhD negative but the child has inherited RhD-positive blood from the father, it could cause complications if left untreated. RhD-negative women of child-bearing age should always only receive RhD-negative blood.

Most people are able to give blood, but only 4% actually do. You can donate blood if you: